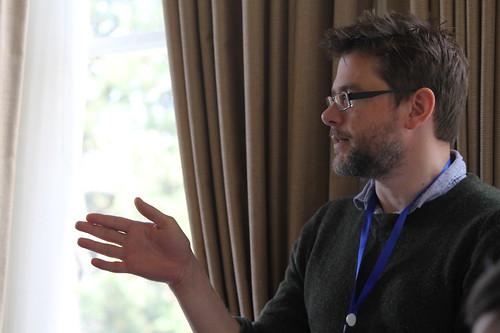 Following the 2016 ECF Consortium annual meeting in May 2016, participants in the project drafted short blog posts about different aspects of their work related to East Coast fever (ECF) vaccine development. This post was contributed by Tim Connelley (University of Edinburgh).

Cattle can be named using a catalogue of different parameters – breed, gender, age, pet-name etc. But as far as T-cells are concerned a cow is named by its Major Histo-Compatability (MHC) genotype. T-cells are key players in the immune responses against a number of important diseases – including East Coast fever – and recognise infected cells via short pieces of protein derived from pathogens presented by molecules of the hosts MHC. To deal with the wide range of pathogens the MHC is highly diverse – it is the most polymorphic locus in mammalian genomes and in humans >9000 MHC classI alleles have been identified.

The global cattle population is highly outbred and has a complex evolutionary development with multiple domestication events, divergence, admixture with related animals and selective breeding contributing to the development of over 800 different breeds.

Consequently the cattle MHC repertoire is likely to be extremely diverse and this has obvious implications for T-cell responses and the development of vaccines that aim to induce these critical players in the immune responses. At present the only breed for which the MHC has been intensively studied is the Holstein-Friesian, the breed that dominates the dairy sector in North America, parts of Europe and the rest of the world.

Knowledge of MHC genotypes of cattle has been largely constrained by the laborious, time consuming and expensive methods necessary to accurately genotype individual animals. As part of a BMGF-funded consortium a novel Next-generation-sequencing (NGS) approach to high-throughput MHC typing of cattle has been developed that allows rapid, cheap and high resolution characterisation of bovine MHC genotypes.

Application of this approach to 100 animals from each of 2 major African cattle breeds – Boran cattle in Kenya and Fulani cattle in Cameroon has identified >130 new MHCI alleles and >50 new MHC genotypes. The results from this single preliminary study has more than doubled the number of known bovine MHCI alleles and demonstrates how extensive use of the technique could rapidly expand our knowledge of this key immunological family of genes. Ongoing work aims to exploit new NGS platforms (e.g. PacBio) to enable the full length of novel MHCI alleles to be sequenced and also to incorporate other members of the MHC group (e.g. MHCII) into the NGS approach.

Integrating such high-throughput systems of MHC genotyping with cutting-edge techniques to identify peptides being presented to T-cells by MHC molecules and define the T-cell responses (i.e. high throughput TCR analysis) offers methods to rapidly characterise the highly complex interactions that determine the outcome of immune responses responsible for protecting animals from a multitude of important diseases.