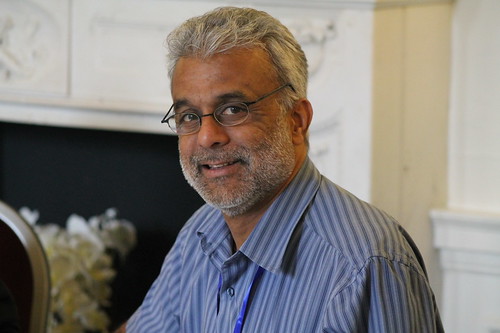 London. May 16-18, 2016. We are half way through the ECF Consortium project period and in the process of wrapping up the 2016 meeting, which was held at Ponsbourne Park close to the Royal Veterinary College (RVC) Hawkshead campus. A huge “Thank you” to Dirk Werling, our host from RVC, and ILRI’s David Kiereini for logistics.

The M25 was not “the longest car-park in the world”, but be warned huge differences in price between an online pre-booked taxi and the taxi rank from Heathrow to Ponsbourne, a 41 mile trip.

The Consortium group is old enough so that almost everyone knew each other; we only had to introduce Thomas Hanke, a new member of the External Advisory Committee (EAC), Sam Oyola, a new member of ILRI, and Gaetano Donofrio, a virologist collaborating with Don Knowles, to the Consortium. Bill Davis from WSU, was also present as a new attendee, but as he has been working in bovine immunology for more than 40 years, most knew him by name if not by face. At the other end of the age spectrum, a PhD student (Kyle Tretina) from Joana’s lab also attended the meeting. We missed Nick Juleff, as he had an unexpected appointment with more senior management at BMGF, but Lindsay Parish from USAID very ably represented the funding agencies.

We continued to experiment with the format of the Consortium meeting with facilitation by Peter Ballantyne. This time, we concentrated on overviews of four of the five Consortium Objectives and conveners of the Focus Groups made over-view presentations on progress since the last annual meeting in 2015. In addition, there were presentations on “hotter” topics: the BHV-4 antigen delivery platform by Gaetano; proteomics of MHC-associated peptides by Nicola; cancer hallmarks and proteins of T. parva that contribute to this phenotype by Kyle and new partnerships/advances on construction of p67C nanoparticles by Vish.

This meeting format worked well, but Consortium and EAC members suggested that more in-depth presentations were also needed to allow more discussion of data acquired in the last year. This was partially addressed by ad hoc meetings during break times but there needed to be more formal time set for this. We (Peter and I) will take these comments into consideration in setting the Agenda for next year. As usual, the EAC did a great job in probing and providing parallel insights. Basically, the science was great and that as we are more than mid-way in the project we need to keep on “the straight and narrow” in order to deliver on the objectives.

We had two days of glorious weather and then true to form it drizzled and rained with gusty winds. The more conscientious ones visited the gym, but the treadmills needed a serious application of lubricating oil. Others played a few holes of “pitch and putt”, walked around the very nice estate or, in the evening, visited the local pub, about 0.5 km away.

We looked at the Results Framework, budget burn rates and assessed our future as a Consortium. What did we agree on? We need to fast-track immunogenicity studies with three antigen delivery systems: BHV-4, mini-gene immunization and yeast to have in vitro CTL data before Q4 2016. We needed to identify which p67C nanoparticles to take forward into challenge experiments. We reduced the number of Focal Groups to four as the previous eight were no longer needed. By mid-June, we will generate a gantt chart for activities over the next 12 months, linked with budget expenditure. We listed publications in preparation and the need to get these out ASAP and as public access. We agreed to e-meet more frequently over the next 6 months, as this is a critical juncture in the project life cycle and a phase during which we need to define our future.

It is 6.09 pm on the 18th and KQ101 is getting ready to depart Heathrow for Nairobi. The “Dream liner” doors have closed, although it sounds like luggage is still being loaded. I am left with a very distinct impression that the dreams of the Consortium are on the right track.

Look out for the upcoming series of short blog posts from project participants, reporting their different approaches and insights. Good drafts of seventeen were ready by the end of day 3!